Another model that was recently added to my collection was the Confederate protected gunboat "General Polk" done by Brown Water Navy.  Contrary to most of the gaming models of Confederate gunboats, the Polk is massive. The depiction of this large model is based on research done by John W. Wallis and published in his work "IRONCLAD AND IRON PROTECTED VESSELS OF THE CONFEDERATE STATES NAVY". It's a great read that reflects the years of research John has invested in the period as well as the amount of new material that has come to light in the last twenty old years.

Let's take a quick look at the Polk... 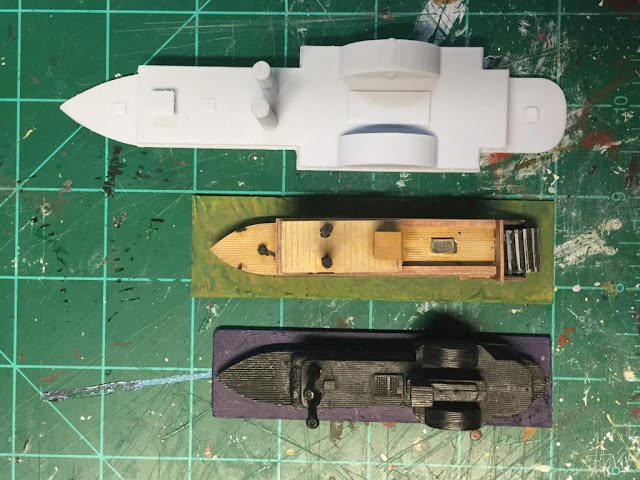 I know, it's been a while since I've posted. Lots of projects that pull me in different directions.

Regardless, I found some motivation with a new batch of ACW ship models I acquired from Matt at Brown Water Navy. Today's focus is one of the new models, the USS Blackhawk.

For nearly 20 years my gaming needs for a Blackhawk were filled by pretty much the only game in town in 1/600 - Peter Pig. Models aimed squarely at the gaming market, The Peter Pig model cleaned up into a serviceable model with good painting and the addition of some boom and masts. Now the Pig has a competitor for this model - Brown Water Navy. You can check out the websites of the each respective products, but what really works here is pictures. So here you go...

In October I orders two models from the Reduced Aircraft Factory store on Shapeways. I received a Curtis H-12 seaplane and two Halberstadt D. V fighters. As with most Shapeways models, surface preparation is an arduous task that must be done to get the best results. That was true with these two models. A lot of time was spent filling the surface grain of the black strong and flexible material.

Fortunately, the work is not hard, but involves repeated application of a gap filling material - in this case acrylic clear coat. It took several weeks to achieve the desired result, but then applying the primer coats took a mere two days. A good thing too as winter is set to arrive this week, putting a close to the spray painting season.

Here's some views of the primed models ready for painting. Now to come up with a choice of paint scheme. The D.V are destined for Mesopotamia and Turkish service, I wanted something 'not-CDL' for a change. The H-12 is going to take some thought as the paint schemes on those beasts can be quite complex. 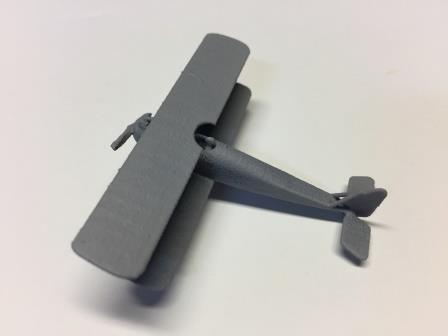 So many miniatures...so little time...so many games

I've not accomplished much painting recently. It's a combination of  spending more of my gaming time on board games and less on painting miniatures.

Still...progress is being made. I'm a year in on building the 15mm German models. I've got a fair amount of work to do, but it's coming along nicely. Getting to the point where i need to paint halftrack crews and detail the interiors. Plus the US backlog is growing with the addition of some M5 Stuarts.

I squeezed in a game of Command Decision back in October at Advance the Colors.

The Wings of Glory pile of models is growing with a couple of Halberstadt D.V and a Curtis H-16 model currently being primed.

Hopefully, I'll have more pictures soon!
Posted by Ray at 6:29 PM No comments:

Good to see Anaconda: Capital Navies getting some exercise!

Gary's running a campaign game and posting the results on his blog.

I'm always happy to see folks putting the Anaconda games to use. Every game will have some unique aspects that defy the design wisdom I envisioned when producing the games.  One thing that fuels our hobby is when different people or groups come to very different strategies when playing the games. I'm pleased the game supports such diverse paths to victory.

Looking forward to the report from turn number 3.
Posted by Ray at 6:52 PM No comments:

At the start of the year I was lured into building a German late war armored recon force using the new Battlefront 234's and PSC 250's. You can read more about that here.

To compound the evilness, PSC released a box set of five Sdkfz 231 series armored cars. This really tugged at my sense of nostalgia. One of the first model kits that I really did well was a Tamiya kit of the Sdkfz 232 8-rad with the box antenna and spaced armor shield. I've always liked the look of the 6-rad and 8-rad armored cars - the functional, angular armor and fenders are the stereotype of German automotive engineering.  So how could I not pick up a box?

The Sdkfz 231 series had a long history in WWII serving from the Poland campaign, through the end of the war. There's a good overview here on Wikipedia.

This weekend was the assembly phase. Opening up the box, we find five (5) identical sprues with the parts to build one (1) model of a Sdkfz 231 series 8-rad heavy armored car.


This is a really well thought out kit. Yes, there are a number of parts, but there's a lot going on here. Unlike a Zvezda kit, it doesn't feel like there are detailed parts just for the sake of having detailed parts. The parts build up into functional assemblies which all fit together into a function model designed to be used as a gaming piece.

I've been making progress on the model of the Maurice Farman Shorthorn that I acquired from Shapeways.com. I wanted it to build a collection of models of the planes used in Mesopotamia during the Great War. The Shorthorn was used in 1915-1918 in various capacities, though it was phased on to training/utility duties at the end of it's service. A slow and stable craft, it's small payload and lack of speed limited it's useful combat life once the Turks began receiving capable fighters like the Fokker Eindekker. But for Mesopotamia, you make do with what you have, so here we go.

The model was printed in Black Strong and Flexible (BSF). Shapeways did a good job on the print and the surface grain was what I expect from BSF. Of course, as with White Strong and Flexible, the first step is still surface preparation to reduce that surface grain. My standard method is to apply several coats of Krylon acrylic gloss matt to the model. I don't like one heavy coat as the varnish can pool on the surface. So repeated thinner coats will eventual yield a surface that is relatively smooth.  The below picture depicts the upper wing and shows the surface texture after painting and a top coat of gloss.


The wings of fuselage were painted in several coats of paint. The base coat was a Folk Art craft paint color called linen. This was over-painted with coats of Vallejo game color 'bone white').  The struts are painted in a medium brown. (I used a craft paint color called 'Teddy Bear Brown'). The metal joints in the skids and the metal around the engine were painted with Vallejo Sky Grey. 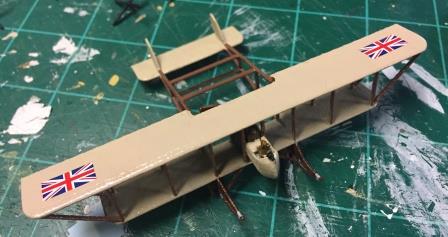 Early war markings looked very different than the roundels we see in the mid and late war periods. Initially, the RFC and RNAS used the Union Jack flag as a marking. When it was discovered that it was confused with the Maltese Cross from a distance, the RFC and the RNAS moved to the classic blue-white-red roundel. But for this early war 'leftover' pressed into service, I wanted to retain those early markings. The Union Jacks are decals from I-94 Enterprises.